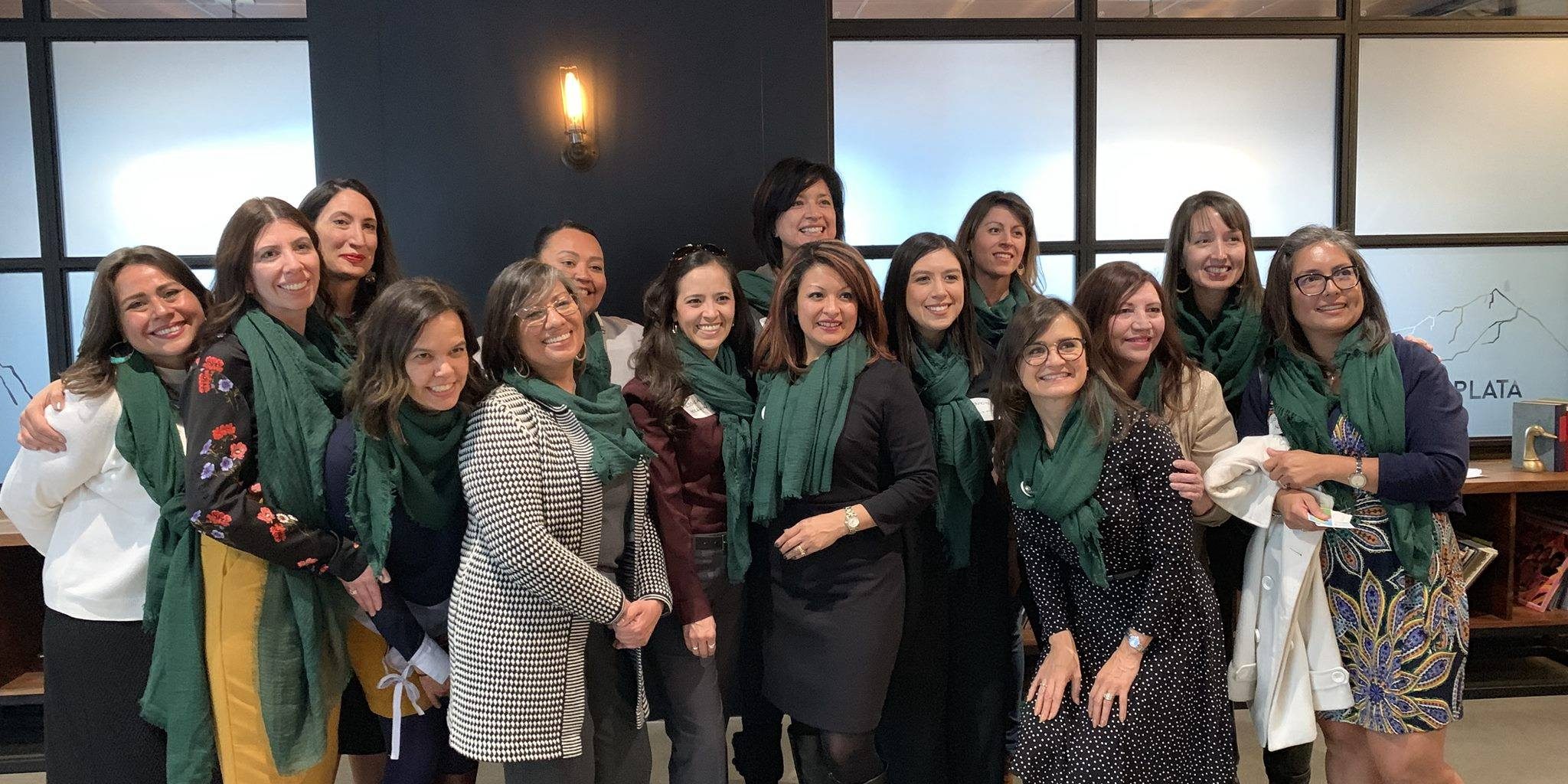 In eight years and seven grant cycles, the first Latina giving circle in Colorado has grown from a simple idea to a community fixture. LatinasGive!, made up of more than 40 Latina women ranging in age from early twenties to seventy-five, has distributed nearly $150,000 in grants to community-serving organizations in the greater Denver area.

“When people believe that they are making a meaningful contribution to changing their community, they feel that in their hearts,” says LatinasGive! Co-founder and Chair Marlene De La Rosa. “They will go above and beyond when that’s the way they feel.”

This mentality carries through the circle’s every campaign, fundraiser, and grant cycle.

LatinasGive! was founded by Marlene De La Rosa, Solicia Lopez, Erika Reyes Martinez, Camila Lara, Chrissy Deal, and Cynthia Gallegos. Marlene connected with the other founders during a Latina leadership training program in Denver, bonding over the shared desire to make a difference for their own communities on the local level, as well as making an impact across the state of Colorado. 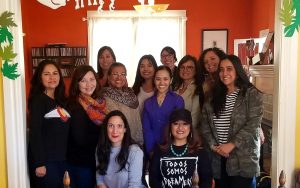 The first grant cycle was simple: each of the founding members contributed $365 for the year, allowing for a pooled donation to community-serving organizations in Denver and beyond. One of the first grants LatinasGive! distributed was a $500 contribution to Denver Cafecito, an informal group of about 300 women dedicated to uplifting female leaders in Denver, particularly women who come from underrepresented backgrounds and communities.

LatinasGive!’s $500 grant allowed Denver Cafecito to formalize technology systems, translating hundreds of business cards collected at Friday morning meetings into a comprehensive email newsletter with more than 1,000 subscribers. “That $500 took this group and elevated them tremendously,” says Marlene. “[We are] smaller but elevated, all using the power of networking.”

In fact, this small but newly mighty network became popular with US Senators and the Colorado governor, and Denver’s superintendent became a regular attendee of the meetings. When Colorado’s mask mandates were lifted, representatives from Denver Cafecito were the first to be invited to tour the governor’s mansion.

As to the future, LatinasGive! have set their sights on growth and maximum impact in Denver and Colorado. This September, several LatinasGive! members attended the Hispanics in Philanthropy conference: what they learned is that most grants are being made in response to basic needs, particularly in light of the COVID-19 pandemic. Upon returning home, LatinasGive! members challenged themselves to look deeply at how they can create systemic change.

During the 2021 grant cycle, for example, LatinasGive! granted $27,000 in multi-year funding to 19 organizations changing public policy and advocacy. 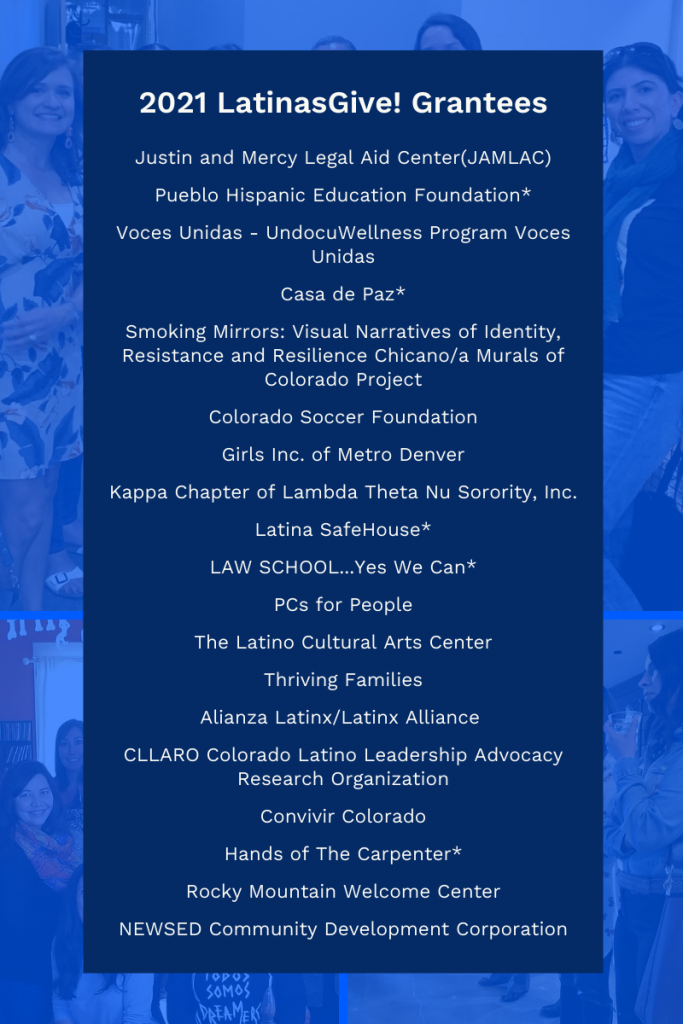 *Received funding in partnership with Latinos Impacting our Future Together (L.I.F.T.) Giving Circle

Instead of needs-based funding — responding to the short-term needs of the Latino community — LatinasGive!’s grantee partners aim to break the mold of offering short-term solutions to long-term problems.

One of the ways LatinasGive! plans to increase membership and impact is by bringing in younger voices: the next generation of philanthropists. To lower the barriers to entry in the circle, LatinasGive! has also started offering a “sponsorship” model of membership, in which younger or lower-income members can contribute a partial payment, bolstered by more affluent members of the circle or by volunteering their time and talents for the circle’s growth. 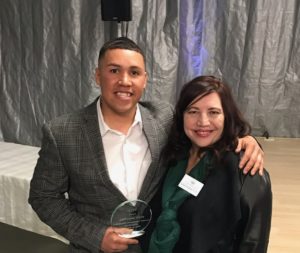 “Each of us can be a philanthropist,” Marlene explains. “There’s no specific definition of ‘philanthropist’, other than that you want to give of yourself and whatever you have to offer to help others in your community.”

One of these up-and-coming philanthropists brought up under the wing of LatinasGive! is Marlene’s own son, who has joined a giving circle called Latinos Impacting our Future Together (L.I.F.T).

“We want this [idea] to go to the next generation,” Marlene says. “Even if we don’t have a lot to give, we have more than other people. So we’re going to give what we can give.” 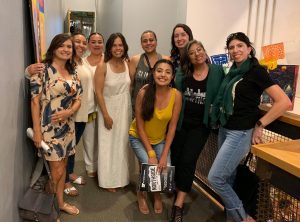 LatinasGive! shows no signs of slowing down anytime soon. Now completing their seventh grant cycle, LatinasGive! aims to break their current funding record — $48,000 distributed to deserving organizations in the last year — and build on the connections, networks, passion, and love that allow members to make an impact on their communities.

For Marlene, this “always up and forward” mentality allows her to live up to her goals for her own life and the beloved community she calls home.

“I love being able to help others around me recognize they are philanthropists,” Marlene says. “That’s what I want to live by — I want to help everybody else reach their potential.”

Be on the lookout for Part 2 of this circle spotlight, “Collaborative Giving in Denver: Brotherhood, Sisterhood, and Community”, where we highlight LatinasGive!’s collaborative efforts with partner organization Latinos Impacting our Future Together (L.I.F.T.) Giving Circle, as well as other collaborative giving campaigns in Denver. To learn more about LatinasGive!, visit their Facebook page. 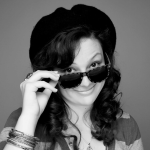 Maggie May is a small business owner, author, and story-centric content strategist within the nonprofit sector. Maggie is the Founder and Executive Director of the agency Get Mighty Creative, as well as a co-founder and the Director of Operations for The Undercard Collective, a giving circle focused on representation in music and the arts. She is a Maryland transplant by way of Florida, Pennsylvania, Ireland, and most recently Salt Lake City, Utah. She has a passion for finding stories and telling them the way they're meant to be told.